A lot of folk have been trying to convince me that pension funds are dividing Americans from their friends across the pond. I think a lot of it is media driven, a common phrase I don’t use very often. Maybe I should.

If you ask me, you shouldn’t gamble with retirement. If your savings are investing, that isn’t the same as a savings account. Risk is risk. Anyhow, have fun reading the Guardian,

In the 59 days since the oil leak in the Gulf of Mexico, Hayward has been transformed into one of the most hated men in the US, and the ferocity of the encounter between him and the House of Representatives committee on energy and commerce was much-anticipated. As one committee member noted: “The anger at BP is at fever pitch. It’s almost palpable.”

The committee has been conducting an aggressive inquiry into the gusher, and called Hayward in to answer specific charges of suspected safety lapses and shortcuts in the design plan of the well in the days before the explosion on the ill-fated Deepwater Horizon rig.

But Hayward, who had been carefully coached by legal and media teams and was testifying under oath, failed to satisfy.

“The committee is extremely frustrated with your lack of candour,” Bart Stupak, who is leading the investigation told him. “You are the CEO. You have a PhD. We hope you have more candour in your responses.”

The reprimand was just a taste of the rancour towards Hayward. He was told by angry committee members that BP had a history of cavalier disregard for environmental rules and workers’ safety.

Hayward’s claims to have ushered in a new regime of safety after taking over as chief executive of the company in 2007 were plainly ridiculed.

“When I heard of the explosion in the Gulf, the name that immediately popped into my mind was BP,” said Stupak.

There was even an apology from Re. Joe Barton, the Republican from Texas who now has Rep. Jeff Miller  calling for him to step down from his post on the Energy and Commerce Committee.

BP is agressively searching for friends and subscribers on YouTube and they are sparing no expense. All day their video adds have plagued my monitor, so I took a moment to see how their newest upload is fairing with the public. You really have to marvel at the PR challenges in this Internet age, and notice just how easy Exxon had it when the spilled a tanker load off the coast of Alaska. Can an energy company survive  online criticism as well as Paris Hilton? I would say yes, but this ongoing predicament is like a thousand unflattering club photos every day.

Pretty soon people will hate BP so much they will demand it gets a reality television show. Dancing with the Pelicans with CEO Hayward and Doug Suttles as judges. Now you the audience at home has a vote, and I suggest you make it. Click the picture before feedback is disabled.

Here at When History Attacks we like to play with propaganda. Take a look at these incredible adds that BP has released over the last few years to reshape there image in terms of environmental conservation.

Goldman Sachs has finally sussed out the fact that negative publicity is bad for business. Time to get your stuff in gear, Masters of the Universe. Hey, that’s all right: just throw a few billion into marketing and lobbying, like the entertainment and insurance industries have done, and you’re sorted.

“Goldman has become one giant pinata to whack,” said Charles M. Elson, director of the John L. Weinberg Center for Corporate Governance at the University of Delaware, adding that he couldn’t recall a previous instance where a company cited bad publicity as a risk to its business. “It’s reflective of the rather bizarre political climate in which we operate.”

Follow the story at the Wall Street Journal’s MarketWatch.

On Wall Street, they pay you so much that they own you. You know? So it’s different. They have your soul. You gave it to them for the money.
—Mrs. Bradley Jack

Read an excerpt from the book at Vanity Fair. 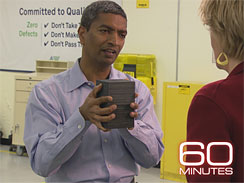 Would you like to make a billion dollars and save the planet?

K.R. Sridhar is a NASA scientist who was working on a project to terraform Mars. He invented a machine that would produce oxygen in the Martian atmosphere and make the Red Planet habitable for humans.

But the budget got cut. The program got cancelled. So K.R. Sridhar took the invention and reversed it to suck in oxygen. He created an entirely new kind of fuel cell, which is far more compact and more efficient than anything now producing electricity. It is designed to replace the grid. And it’s coming.

END_OF_DOCUMENT_TOKEN_TO_BE_REPLACED

This is a very fascinating debate, and I highly recommend you watch the whole thing. This may be the most thorough review of skeptic concerns I have ever seen, and I came away from it with enough sources of science to reach my own conclusion. The Debate follows an interview with Martin Durken, who made a documentary called The Global Warming Swindle. I’ll warn you, the Q & A section after the debate gets really bizarre. I’m not kidding, it’s messed up in pt.8.

Africa’s frustration at the United Nations climate summit boiled over on Monday as delegates walked out of key talks and continental giant Nigeria warned the negotiations were now on red alert.

Sources at the marathon talks said Africa led a five-hour boycott of working groups, with the backing of the Group of 77 developing nations, and only returned after securing guarantees that the summit would not sideline talks about the future of the Kyoto Protocol.

The Kyoto Protocol ties rich countries — but not developing countries — that have ratified it to legally binding emissions curbs.

It also has an important mechanism enabling the transfer of clean-energy technology to poorer nations.

Yet it does not include the United States, which says the Protocol is unfair as the binding targets do not apply to developing giants that are already huge emitters of greenhouse gases.

Algeria, speaking at a press briefing on behalf of the 53-member African Union, demanded that there should be a special plenary session devoted to Kyoto.

Asked about the state of negotiations, Nigeria’s pointman rang the alarm bell.

“It is ‘climate code red’ right now, we are in code red right now, we stand at the crossroads of either hope for Africa or hope dashed in ‘Hopenhagen’,” Victor Ayodeji Fodeke told Agence France-Presse.

LONDON – E-mails stolen from climate scientists show they stonewalled skeptics and discussed hiding data — but the messages don’t support claims that the science of global warming was faked, according to an exhaustive review by The Associated Press.

The 1,073 e-mails examined by the AP show that scientists harbored private doubts, however slight and fleeting, even as they told the world they were certain about climate change. However, the exchanges don’t undercut the vast body of evidence showing the world is warming because of man-made greenhouse gas emissions.

The scientists were keenly aware of how their work would be viewed and used, and, just like politicians, went to great pains to shape their message. Sometimes, they sounded more like schoolyard taunts than scientific tenets.

The scientists were so convinced by their own science and so driven by a cause “that unless you’re with them, you’re against them,” said Mark Frankel, director of scientific freedom, responsibility and law at the American Association for the Advancement of Science. He also reviewed the communications.

Frankel saw “no evidence of falsification or fabrication of data, although concerns could be raised about some instances of very ‘generous interpretations.'”

Some e-mails expressed doubts about the quality of individual temperature records or why models and data didn’t quite match. Part of this is the normal give-and-take of research, but skeptics challenged how reliable certain data was.

The e-mails were stolen from the computer network server of the climate research unit at the University of East Anglia in southeast England, an influential source of climate science, and were posted online last month. The university shut down the server and contacted the police.

Million words reviewed
The AP studied all the e-mails for context, with five reporters reading and rereading them — about 1 million words in total.

One of the most disturbing elements suggests an effort to avoid sharing scientific data with critics skeptical of global warming. It is not clear if any data was destroyed; two U.S. researchers denied it. 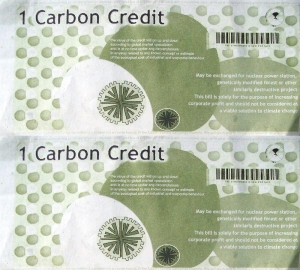 The first business in China has bought carbon credits, yet somehow I don’t feel the urge to get on the bleachers with my bright green-foam big-hand and wave a triangular banner in the air. So how big was this investment in a low carbon future?

Auto Insurance company Tianping made a 40 thousand dollar investment in voluntary carbon credits from commuters who agreed to take public transportation during the Olympic games. Keep in mind half the traffic was grounded by law as is.

So what does this pledge really add up to? The answer is… well, there is no answer. I guess you could look at it like a pledge from a poor man to ask for change on a relatively busy corner. Not a revolutionary concept.

While it may reduce the size of your glass, inflation wants you to know that it’s still half-full.